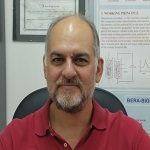 Professor Spyridon Kintzios is Dean of the School of Food, Biotechnology and Development of the Agricultural University of Athens (AUA) and Head of the Laboratory of Cell Technology at the same institution. He received his PhD in genetics from the Technical University of Munich. He has a working experience of over 28 years in biotechnology, particularly in the fields of biosensors and cell culture. He is the author or co-author of 97 peer-reviewed articles in cited international scientific journals, as well as the author or co-author of more than 90 international book chapters and conference presentations. He is also the editor of five international books, a fellow of several scientific societies and the recipient of several scientific awards, as well as a permanent member of several public and industry committees in Greece and abroad. He is the inventor and developer of the Bioelectric Recognition Assay and the technology of Molecular Recognition through Membrane Engineering and co-founder of two start-up biotech companies.

Cell-based biosensors represent the next step in the design evolution of diagnostic systems, offering superior sensitivity and representing a versatile source of wide biorecognition capabilities. On the other hand, the employment of cells as biosensing elements in commercial analytical platforms has been challenged due to a series of factors, including their limited selectivity and storability. Progress in the field of synthetic cells has led to a considerable improvement of the specificity of response. In particular, the technology of Molecular Identification through Membrane Engineering has been adopted in commercial biosensor systems, such as the i-BERA platform, an integrated Point-of-Care/Point-of-Test system based on the principle of the Bioelectric Recognition Assay. In its current version, the system utilizes a number of different electrophysiological approaches to measure a single sample, whereas results are interpreted with the aid of customized artificial intelligence software. The worldwide application of the i-BERA platform in food safety and toxicology monitoring is reviewed.