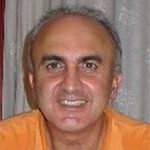 Christos V. Christides obtained his Degree in Physics from Physics Dept., Heraklion, University of Crete, in 1984 and his Ph.D. degree in Experimental Condensed Matter Physics from the Dept. of Physics, University of Athens in 1990. His PhD thesis has been carried out at the National Center for Scientific Research (NCSR) “Demokritos”, and concerns the study of intrinsic magnetic properties in rare-earth iron based permanent magnets. Between 1991 and 1993 he was employed as a post-doctoral research fellow in Chemistry Dept, University of Sussex, UK, and carried out research on the newly discovered superconducting fullerides and C70 fullerens, using mainly neutron and synchrotron radiation x-ray scattering experiments at Rutherford-Appleton Laboratories, UK, and the National Institute of Standards and Technology (NIST), USA. He was appointed in 1995 as a Research Associate at the NCSR “Demokritos, to work on a EU funded project on Giant-magnetoresistance (GMR) materials for sensor applications. In 1998, he joined as a Faculty Member the Dept. of Engineering Sciences, University of Patras and now is an Associate Professor in the Dept. of Computer Engineering and Informatics at the same University. He has published over 100 peer reviewed articles, and has edited three volumes for teaching Electrical and Electronic Circuits at the undergraduate level. His research is highly cited, with a personal reference from Prof. Sir Harold Kroto, the 1996 Nobel Prize for Chemistry, in his Nobel Lecture paper given in conjunction with the award. His research interests cover a wide spectrum of diverse areas from fundamental research to applied problems in experimental condensed matter physics and materials science. These range from permanent magnet materials, superconducting fullerides and fullerenes, strongly-correlated electron systems such as perovskite thin film structures that exhibit colossal magnetoresistance and exchange biasing effects, multilayered films that exhibit the GMR effect, anomalous Hall effect in layered, granular films, artificial nanostructures, and topological insulators.

Granular films are artificial nanostructures, composed of granules with sizes between a few and a hundred nanometers, with programmable electronic properties that makes them potential candidates for nanotechnological applications and fundamental studies of disordered solids. Granular electronic systems with metallic nanoparticles randomly dispersed in an insulating matrix can be made either a good metal or an insulator by tuning the coupling between granules. In the metallic phase the transport properties are those generic for all disordered metals whereas in the insulator phase the conductivity exhibits a variety of activation behaviors. Topological insulators (TI) are materials that are insulating in their interior but can support the flow of electrons on their surface. The underlying cause is time-reversal symmetry: their physics is independent of whether time is flowing backward or forward. These surface states are robust, maintained even in the presence of surface defects. V. Sacksteder et al [Phys. Rev. Applied 3, 064006 (2015)] predicted that, by introducing a layer of strong surface disorder, and patterning that layer’s depth, a TI’s surface conduction can be focused, directed along particular channels, and switched—all of the requirements for a topological integrated circuit. In this context, experiments were performed by introducing disorder on edge conduction channel of nanogranular Bismuth (Bi) thin films. Disorder is induced from grain boundaries between magnetic Co and Bi composite nanostructures. Hall resistivity ρΗ(Β) and perpendicular magnetization M(B) measurements show that the Hall effect displays 3 contributions: one from ordinary Hall effect, a second from the anomalous Hall effect that follows the magnetization, and a third one that, for B>Br, reverses the sign of ρΗ(Β) curves for T≤200K, due to the topological Hall effect.